What is your home sitting on? The simple answer is the ground. However, the real answer is a bit more complicated than that.

Soils are composed of different ingredients like sand, silt, loam, and clay. These ingredients determine how soils behave under wet and dry conditions and when they need to support weight. Soil characteristics have a major effect on the foundations and other structures upon which they're built.

Our Tampa foundation repair experts understand the differences between soils and the best ways to repair foundation soils depending upon the conditions. If you have any foundation issues in your home, give us a call today or click below to get a free repair estimate! We offer all our services in Saint Petersburg, Tampa, Orlando and the nearby areas. 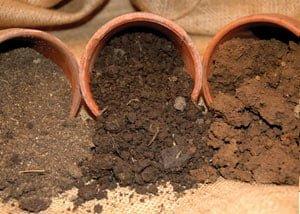 Sandy soil (left) and sandy loam soils (middle) expand and contract very little with moisture changes. They can be very reliable when supporting a foundation.

Clay soils (right) expand and shrink in volume dramatically with moisture changes and can cause significant foundation damage.

Moisture and soil: The effects water has on soil and your foundation

Different soil types are affected by moisture in different ways. Each of these three soils reacts to water differently:

Sandy Soils: Water passes through sandy soils rather than being absorbed, making them very stable. Instead of expanding as they absorb moisture and contracting as they dry out, sandy soils maintain a fairly consistent volume and density.

Clay Soils: Soils rich in clay and silt have the greatest potential to damage a foundation. Clay absorbs water easily, expanding in volume as it becomes more saturated. So-called expansive clays can cause foundations to crack, heave and shift.

When clay soils dry out, they shrink and crack, leaving gaps around a house where water from the next storm can penetrate easily and deeply to repeat the expansion cycle. Clay-rich soils usually cause more foundation damage by expanding than by contracting.

Sandy Loam Soils: Loamy soils are usually a very stable soil that shows little change with the increase or decrease of moisture temperature.

The primary concern with foundations built on loamy soils is erosion. When soils underneath your foundation erode, they may begin to be inappropriate strata for sustaining the weight of a foundation and home structure.

Because of the constant cycle of wet and dry periods that occur as the weather changes, certain types of soil can expand and contract indefinitely, subjecting your foundation to settling or expansive stresses that often cause damage. 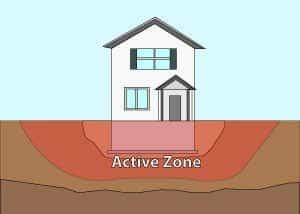 The active zone of foundation soils

Your home is resting on many different layers of soil, each with different thicknesses and performance characteristics that can affect a house foundation.

These soils have formed or deposited there over thousands of years -- some by water, some by wind, some by glaciers, and some by the contractor who built your home.

Typically, soil layers gain in stability and load-bearing capacity with depth. The surface layer is made up of organic materials, making it easy for plants and other forms of vegetation to grow.

As you go down, you'll find layers of sand, silt, clay, and loam soils, depending on where you live. Deep below these layers is a layer of bedrock. Bedrock is a layer composed of either rock or very stable, densely packed soils.

The soil you should be most concerned about is known as the active zone immediately around and underneath the house. This soil is most affected by changes in moisture and climate -- and the source of most foundation problems. The active zone may vary from a few feet below the surface to more than 30' below grade, depending on what area of the country you live in.

How does foundation settlement occur? 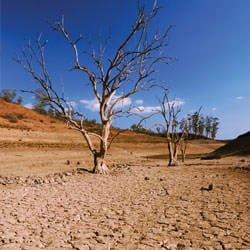 1. Drying and shrinking of soil

Foundation soils experience most of their drying and shrinking from two common causes:

Drought: Prolonged dry periods cause soil to dry out. As we know, when clay dries out, it shrinks. Soil shrinkage beneath a foundation has the same effect as soil settling: It usually causes a section of the foundation to crack and settle into the void or hollow area where settlement has occurred.

Maturing Trees: The root system of a tree can be up to twice the size of the tree's canopy. If a tree's branches extend over your home, there's a good chance that they extend under your house as well, drawing moisture up from the soil and causing it to shrink significantly. 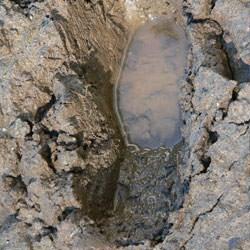 2. Wetting and softening of soil

The soils around your foundation experience wetting and softening primarily for these three reasons:

Heavy Rain & Flood Conditions: As clay soil gets wet, it holds on to water and becomes very soft. This soft soil can be weak, causing the home to shift (or "sink") down into it.

Poor Drainage: If water is allowed to stand or pond next to your home, the soil will absorb the water. As it does, the soil can weaken and soften once again.

Plumbing Leaks & Broken Water Lines: When a home's plumbing begins to leak under a slab foundation, the soils underneath can begin to become saturated, weakening their supporting capacity. 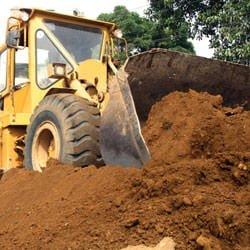 In order to level a site where a foundation will be built, builders sometimes bring in loose soil from another location to fill depressed or hollow areas.

This newly moved fill soil is much looser and lighter than the dense, hard-packed virgin soils at the site that haven't been disturbed -- possibly for centuries!

The fill soil brought in by the builder has to be compacted thoroughly before a foundation is built on top of it. If the soil is not compacted well, it may begin to compress underneath the weight of your new home, creating settlement problems that can damage your foundation.

As a locally owned and operated foundation repair company, LRE Foundation Repair understand the ways that soils in Florida affect the homes they surround. Our team of in-house foundation soil repair and solutions experts here in Tampa are is ready to meet with you to explain what's happening with your foundation -- and how to fix it.

To help you decide, we provide each of our customers with a free, no-obligation foundation repair inspection, in writing, before you spend a dime with us. Each inspection includes an on-site inspection, a personal consultation, and a detailed proposal on how we can work to fix your problem. We proudly serve Saint Petersburg, Tampa, Orlando, Sarasota, Spring Hill, Hudson, New Port Richey, Daytona Beach, and the surrounding areas of Florida. Call us at 1-844-610-2840 or email to get started!